Newton and Euler Laws of Motion

of the linear momentum of an object is equal to the net force acting on that object. If

is the force vector acting on an object with mass

moving with a velocity vector

, then, by denoting the momentum by

Euler’s Law of the Balance of Linear Momentum

is the mass density distribution,

is the velocity vector distribution,

is the body force distribution,

is the traction vector distribution acting on the surface of

are the differential volume and surface elements of the arbitrary volume

Euler’s Law of the Balance of Angular Momentum

Euler’s law of angular momentum preservation states that the rate of change of the angular momentum of an arbitrary volume of a continuum body around a fixed origin is equal to the torque (measured around the same fixed point) applied by the traction vectors on the boundary and the body forces acting on the continuum points. Thus, according to Euler’s Law:

is the position vector relative to another fixed point such that

and using the fact that

is a fixed vector:

Newton’s laws of motion were originally formulated for systems of rigid particles mechanically interacting with each other. Newton’s laws can be extended to a continuum by considering a differential volume and the stresses acting on it. Let

be a set representing a deformed configuration. Consider a differential cube of mass

inside the body with dimensions

and whose mass density is

. The differential volume of the cube is given by

acting on the cube and the stresses on the different faces of the cube. To write the differential form of the equilibrium equations, the stresses are assumed to be continuous functions. Such assumption allows the use of the first component in the Taylor expansion for the stresses. Thus, the resultant force component

acting on the cube in the direction of the first basis vector can be evaluated as follows:

Thus, in component form, the equilibrium equations can be written as:

If the divergence operator is used, the equations of equilibrium can be written in the following vector form:

The three angular momentum balance equations can be used to derive the symmetry of the stress tensor. Consider a differential rectangular volume oriented with the coordinate system with volume

. Let the stresses on the sides with the negative normals have stresses

and the stresses on the sides with positive normals have stresses

. The first two equations for the balance of linear momentum dictate the following:

have the following form:

The rate of change of angular momentum around the axis

and has the form:

, using the equilibrium equations, and neglecting the smaller terms we get:

. By repeating the procedure for the moment around other axes we reach:

Using Euler’s law of the balance of linear momentum we have:

is the corresponding differential volume in the reference configuration, which is independent of time. We will also utilize the relationship between the traction vector and the stress tensor:

, and the divergence theorem which lead to:

The mass balance equations can be used to simplify the left hand side: 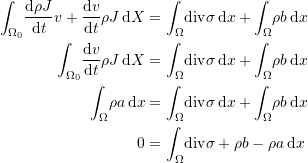 Since the integration domain is arbitrary, then the integrand is equal to zero. Therefore, the linear momentum balance equation is:

Using Euler’s law of the balance of angular momentum we have:

is the corresponding differential volume in the reference configuration, which is independent of time. We also utilize the mass balance equations: 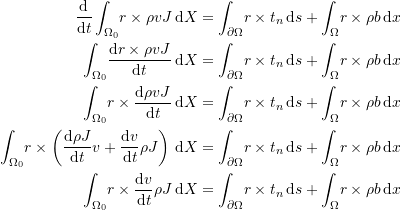 Using the balance of linear momentum equation and replacing

The last equation can be written in component form to show the symmetry of the stress matrix. The

component of the above vector equation can be written as:

Using the divergence theorem, the right hand side can be converted into a volume integral as follows:

The right hand side can be further simplified as follows: 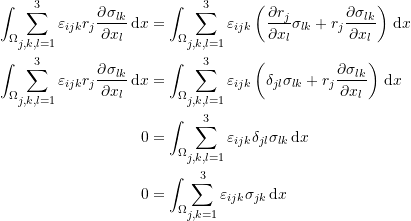 Therefore, the integrand is equal to zero. Setting

, the three components of the above vector equation have the form:

It should be noted that the book by P. Chadwick has another proof showing the same result without relying on the component form of the vector equation.

Solution of the Equilibrium Equations in Static Problems

A continuum problem is solved if a stress field (the stress at every point inside the body) and an acceleration field are found such that the three equations of force equilibrium (conservation of linear momentum equations) are satisfied at every point. On the other hand, the restriction that

ensures the conservation of angular momentum and no additional information can be obtained from considering the three equations of moment equilibrium. The unknown stress and velocity fields are required to also satisfy certain boundary conditions, which are traditionally given as either displacements or external traction forces on the exterior of the body and initial conditions for velocities. In static equilibrium, which is the purpose of many engineering applications, the acceleration vector is assumed to be zero and, thus, the equilibrium equation is simplified and the stress field becomes the only unknown. In that case, the equations become:

. The problem is mathematically formulated as follows:
Let

be a set representing a reference configuration of a continuum body. Given a constant or variable body forces vector

. On the first part,

are known so we have the boundary conditions for

. On the second part,

, the displacement of the continuum is given. The boundary of

Difficulties Associated with Obtaining a Solution to the Equilibrium Equations

There are two difficulties associated with solving Eq. 2. First, these are three equations of static equilibrium. However, there are six unknowns (six stress variables). Thus, in their current form, many solutions could possibly satisfy the equilibrium equations! The second issue is that some of the boundary conditions contain expressions of displacements, while the equations themselves in this form do not have displacements as variables! These two major issues impel replacing the six unknown stress variables in the above equations with three unknown variables (usually the three displacements

. This can be performed by using a “constitutive equation” that describes the relationship between the stress and the strains inside the material. By replacing the stresses with the strains, and by using the relationship between the strains and the displacements described in the strain measures section, the problem becomes well posed, i.e., a solution can be obtained. The following few problems illustrate the applications and the solutions of the equilibrium equations given simplified assumptions allowing such solutions to exist.

A stress field over a body that is in static equilibrium has the following form:

are the coordinates inside the body. Find the body forces vector field that is in equilibrium with this stress field.

Since the given stress matrix is symmetric, it automatically satisfies the angular momentum balance equations. Using Eq. 2 above, the body forces vector field has the following form:

metres at the top varying linearly to

metres at the bottom. The beam is used to carry a concentrated load of

, and is subjected to a gravity field with

. Assuming that (a) the only nonzero stress component is 

is constant on every cross section perpendicular to

, and (c) the undeformed and deformed coordinates coincide, find the distribution of the stress component 

along the length of the beam.

according to the equations:

A horizontal slice of the beam can be analyzed to find the equilibrium equation as follows:

Equating the sum of the vertical forces acting on the slice to zero yields:

A boundary condition for the stress is given at the free end as follows:

Even with the very simplified assumption that 

The shown horizontal beam has a density

and is under a constant horizontal body force component

is the only nonzero stress component, (b)

is only a function of

, and (c) the undeformed and deformed coordinates coincide, find the distribution of

It should be noted that the first two assumptions are very strong. For example, closer to the fixed boundary, there could be other nonzero stress components which would cause stress concentrations. Additionally,

could be higher in the middle and lower closer to the boundaries. However, to easily achieve a closed form solution to the equilibrium equations, such assumptions are required. Otherwise, a numerical solution (for example, using finite element analysis) would be required to find all the components of the stress.

The equation of equilibrium in the horizontal direction is given by:

is a function of only

Integrating the above equation yields:

is a constant that can be obtained from the boundary condition given for the stress:

Therefore, the stress distribution is:

Notice that if the end of the beam

If the body is subjected to the following body forces vector:

then, find the values of

such that static equilibrium is achieved.

In sections 6.3.2 and 6.3.3, the Eulerian form of the differential equation of equilibrium was derived. In the Eulerian form, the independent variables are the spatial position coordinates in the deformed configuration

. One difficulty arises from the fact that the set

representing the embedding of the a deforming object is in itself unknown. It is, therefore, desirable to have the differential equations written written in terms of the referential position coordinates represented by the set

. In the following two subsections, I will present the derivation of these equations using two approaches, a component form, and a vector form approaches.

In the interest of brevity of the derivation, I will be utilizing Einstein Summation Convention. The Eulerian form of the differential equation is given above as:

My intention now is to replace the variables

. For the acceleration and the body forces vectors, that only means a simply change of the argument with the capital letters used for the mappings of the referential coordinates:

with the spatial density:

I will also recall the equation that relates the First Piola-Kirchhoff stress tensor with the Cauchy stress tensor:

Substituting the above equations in the Eulerian form of the differential equation yields:

I will decompose the first term, replace the derivation with respect to the components of

with the derivation with respect to the components of

, and will utilize the fourth statement in the matrix calculus section: 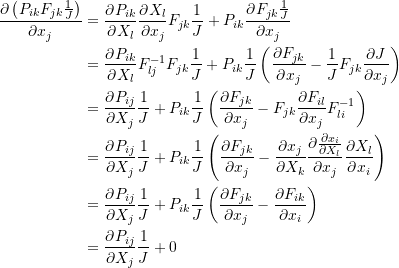 Therefore, the Lagrangian form of the equilibrium equation can be written in terms of the First Piola-Kirchhoff stress tensor as follows:

Euler’s law of the balance of linear moment that I showed above is repeated here:

By a simple change of variables,

can be replaced by

and the derivative operator

is used instead of

to indicate the Lagrangian formulation (material time derivatives with respect to the reference position comoponents):

for the traction vector:

can be chosen arbitrarily, the vector form of the differential equation has the form:

The balance of angular moment imposes the following restriction on