In the previous section, the basic elements that are used for discretizing a plane domain were introduced. These elements can be used to mesh material bodies with regular geometries. For irregular geometries, quadrilateral and triangle elements will not necessarily follow the shapes of the basic elements described (a quadrilateral element will not necessarily be a square or a rectangle, and the triangle element will not necessarily have a right angle, as described before). Isoparametric elements enable meshing an irregular domain with triangular or quadratic elements that do not maintain orthogonality between the sides of the element. The purpose of the isoparametric formulation is to create shape functions that would ensure the compatibility of the displacement between neighboring elements while maintaining the requirements for shape functions mentioned in the previous section. When the elements’ sides do not necessarily have right angles, the isoparametric formulation is used to map those irregular elements into elements with regular shapes. The mapping functions used are the same shape functions that are used for the displacements, and hence, the name isoparametric (same parameters). After the mapping, integration is performed in the coordinate system of the element with the regular shape. The integration is performed numerically rather than using exact integrals. Numerical integration is preferred over exact integration for two reasons. The first is to reduce the computational resources required, and the second because the irregular geometries render radical (fraction) quantities that could be problematic for exact integrals. Many numerical integration techniques are available but the technique that is widely used for finite element analysis is the Gauss numerical integration technique.

such that the only requirement is that

can be defined for the element such that the coordinates of the nodes 1, 2, and 3 are

, respectively. A mapping between the general coordinate system

where the shape functions have the form:

The gradient of this mapping has the following form:

Therefore, the inverse of the gradient is well defined as:

is defined in the

and the associated virtual strain

can be chosen as follows:

as a distributed load per unit length of the one dimensional element, then, the contribution to the virtual work equation of this element are as follows:

coordinate system. In general, for a function

, the virtual work contributions of the element have the forms:

Therefore, the stiffness matrix and the nodal forces vector for this element have the form:

are equal to 0, 4.5, and 10 units, respectively. Assume that a constant load per unit length

is applied in the direction of

. Find the stiffness matrix and the nodal forces for that element.

The mapping function between the two coordinate systems has the form:

Applying the above equations, the stiffness matrix and the nodal forces for the element have the form:

Similar to the one dimensional case, an irregular quadrilateral can be defined with four nodes such that the only requirement is that the node numbering is counterclockwise and that the element area is positive. Let

be the two dimensional coordinates of nodes 1, 2, 3, and 4, respectively. The element coordinate system

Figure 2. Isoparametric Mapping in the Two Dimensional Case of a 4-node Bilinear Element

of the coordinate transformation is invertible at every point within the element.

To demonstrate the role of these matrices, let

represent an infinitesimal vector in the element coordinate system

. The coordinates of this vector in the general coordinate system

and the coordinate system defined by

be the same two vectors in the coordinate system defined by

. Let the area measure in this coordinate system be

. The relationship between the two area measures is given by:

This formula can be used to transform integration over the

coordinate system to integration over the

coordinate system. The displacement function in

coordinate system is given by:

coordinate system have the following form:

The gradients of the displacements functions in the

The above relations allow the calculation of the two dimensional strains as follows:

Therefore, the strains can be written in terms of the degrees of freedom as follows:

Then, the stiffness matrix of the element can be evaluated as follows:

The element nodal forces can be evaluated as follows:

is the thickness of the element,

is the plane strain or plane stress material constitutive relationship,

is the body forces vector per unit volume, and

is the traction vector per unit area on the surface

. Notice that the surface element

is given in the

coordinate system and it should be transformed accordingly to the

Note that the results of this section can be extended in a straightforward manner to the three dimensional 8 node isoparametric brick element.

and a unit thickness. Assume plane stress conditions with

The following Mathematica code can be utilized to obtain the stiffness matrix and the nodal forces due to a constant body-force vector per unit volume for any 4 node isoparametric element as a function of the coordinates of the 4 nodes of the element. Study the code carefully. In particular, notice the following: If the nodes of the element are changed such that they are not defined in a counterclockwise fashion, then

coordinate system are given by: 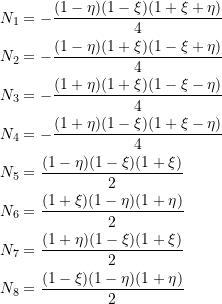 The development of the equations is similar to the previous section and is left to the reader. The only difference is the number of degrees of freedom of the element. The extension to the three dimensional case (the 20-node brick element) is also straightforward. The following is the Mathematica code that can be utilized to produce the stiffness matrix and the nodal forces due to a constant body forces vector for the 8-node isoparametric element as a function of the coordinates. Notice that the numerical integration built-in function in Mathematica has a higher accuracy than the traditional Gauss integration scheme (which will be presented later) but requires higher computational resources.

and the coordinate system of

is shown in Figure 4 for the two types of triangular elements studied (Linear and quadratic). The development of the equations follows the previous section. The shape functions in the

coordinate system for the triangular elements are similar to the ones obtained previously.

. In general, numerical integration of such a function has the form:

For the Gauss integration method,

is called an integration point and

is called the associated weight. Now, if

So, for functions that are very close to being affine, a numerical integration scheme with 1 integration point that is

with an associated weight of 2 can be employed.

Gauss Integration over One Dimensional Domains

. Then, the definite integral of

can be approximated by the following formula:

is a weight factor associated with each

is a linear function, then one integration point is enough to exactly integrate

Figure 5. Gauss Integration for Polynomials of the 1st, 3rd and 5th Degrees

can be obtained by the two integration points

with the two weight factors

. The exact integral is equal to:

Equating the Gauss integration with the exact solution yields the following four equations:

. The solution to the above four equations yields

. The Mathematica code to solve the four equations is:

points can exactly integrate a polynomial of order

. Then, the integral of

over the domain can be approximated by the following formula:

is an integration point while

are weight factors associated with

respectively. It can be easily seen that this is a direct consequence of the one dimensional Gauss integration formula as follows:

As described for the two dimensional linear quadrilateral element, the strains of the 4 node elements are linear, and thus, the entries in the matrix

are quadratic functions of position. Thus, a

numerical integration scheme is required to produce accurate integrals for the isoparametric 4-node elements (Figure 6). On the other hand, the strains in the two dimensional quadratic quadrilateral are quadratic functions of position, and thus, the entries in the matrix

are fourth-order polynomials of position. Thus, a

associated with the coordinates

Elements that are integrated as per the previous section are termed “full integration” elements. For example, to integrate the

stiffness matrix of the 4-node plane isoparametric quadrilateral element, each entry will be evaluated at the four locations (

stiffness matrix of the 8-node plane isoparametric quadrilateral element is 2,304 computations since it uses a

For the 8-node plane isoparametric quadrilateral, a

Gauss integration points scheme is used instead of the

Figure 7. Full vs. reduced integration in the 4-node quadrilateral element

Figure 8. Full vs. reduced integration in the 8-node quadrilateral element

The spurious modes will be illustrated using the following problem.

The shape functions of the shown element are:

Therefore, the strains have the form:

The stress strain relationship for plane stress is given by:

can be evaluated using the following integral where

is the element thickness:

), and therefore, the stiffness matrix has the dimensions

The strain energy associated with this displacement mode is equal to:

which gives the same results as the exact integration.

. The strain energy associated with this displacement mode is equal to zero. Thus, the reduced integration scheme predicts that the displacement field shown does not require any external forces applied to the element. Thus, this element is unstable if loads produce the displacement mode shown, i.e., bending! The following is the Mathematica code used for the above calculations:

The strains of the 3 node triangle element are constant, and thus, the entries in the matrix